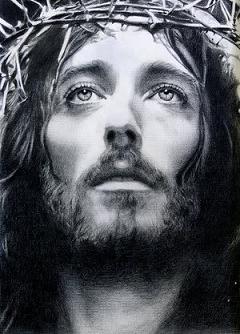 Jesus of Nazareth, Yeshua Ha-Nozri,
Jesus is the Messiah, Christo (Greek), Christ (English)
(c. 6-4 BC, Bethlehem Nazareth, Judea – 7 April 30 AD, Jerusalem, Calvary or Golgotha Judea, Roman Empire) (crucifixion).
Nationality: Israel
Category: Votaries оf Spirit
Occupation:  Spiritual teachers
Specification: Christianity
Unique distinction: Founder of Christianity, The Son of God and God incarnate in the Christian religion. Birthday Is Holiday 25 December (7 January), Christmas.
Gender: Male
Quotes: 1. A new command I give you: Love one another. As I have loved you, so you must love one another. 2. Ask and it will be given to you; seek and you will find; knock and the door will be opened to you. 3. You shall love the Lord your God with all your heart and with all your soul and with all your mind. This is the great and first commandment. And a second is like it: You shall love your neighbor as yourself. 4. Ye shall know the truth, and the truth shall make you free. 5. I am the Way, the Truth, and the Life. 6. Let me into your lives, your world. Live on me, so that you may become truly alive. 7. Do not be anxious about tomorrow, for tomorrow will be anxious for itself. Let the day’s own trouble be sufficient for the day. 8. For what shall it profit a man, if he gain the whole world, and suffer the loss of his soul? 9. Not everyone who says to Me, ‘Lord, Lord,’ shall enter the kingdom of heaven, but he who does the will of My Father in heaven. 10. But many that are first shall be last; and the last shall be first. 11. If you want to be perfect, go, sell your possessions and give to the poor, and you will have treasure in heaven. 12. If ye have faith as a grain of mustard seed, ye shall say unto this mountain, Remove hence to yonder place; and it shall remove; and nothing shall be impossible unto you. 13. Suffer little children, and forbid them not, to come unto me: for of such is the kingdom of heaven. 14. With men this is impossible; but with God all things are possible. 15. Judge not, that ye be not judged. 16. Repent: for the kingdom of heaven is at hand. 17. Arise, and be not afraid. 18. Enter by the narrow gate; for wide is the gate and broad is the way that leads to destruction, and there are many who go in by it. Because narrow is the gate and difficult is the way which leads to life, and there are few who find it.

Social and professional position:  Who is Jesus Christ: Jesus Christ is the founder of Christianity, the Messiah foretold in the Old Testament. In Christianity Christ is the Son of God and God incarnate.
The main contribution to (what is known): Jesus Christ is the Saviour of men and he founder of Christianity.
Contributions:  Jesus Christ is the founder of Christianity, the Saviour of men, the Messiah foretold in the Old Testament. The English word “Jesus” comes from the Greek form of the Hebrew Joshua, a common name which means “savior. “Christ” is a title and it comes from the Greek form of the Hebrew Messiah, meaning “anointed one.”
The Christian doctrinal statements, which contained in The Apostles’ Creed (ca.180 AD, 390 AD) and in The Nicene-Constantinopolitan Creed (325, 381 AD).
The Christian views of Jesus center on the belief in:
1. God the Father, Jesus Christ as the Son of God and God incarnate.
2. Christ was conceived by the power of the Holy Spirit and born of the Virgin Mary.
3. Jesus is the Messiah whose coming was promised in the Old Testament.
4. The Atonement of Christ. Sinless Jesus voluntarily died on the cross and provided salvation and reconciliation with God.
5. The death, resurrection, and ascension of Christ.
Christian doctrine holds that by his crucifixion and resurrection he paid for the sins of all mankind. The resurrection of Jesus was central to the early church.
6. Performance of miracles. In the Gospels there are descriptions of 34 miracles performed by Jesus. Over the course of his ministry, Jesus is said to have performed various miracles, including healings, walking on water, calming a raging storm, turning water into wine, multiplying a small meal, and raising several people, such as Lazarus, from the dead. He performed miracles not for the sake of glory but because of his pure unselfish love and compassion.
7. One holy catholic and apostolic Church.
8. The future Second Coming of Jesus, the Day of Judgement and salvation of the faithful.Jesus’ teachings departed significantly from the Jewish law of his day. The teachings of Jesus focused primarily on the “The Kingdom of God” and were usually relayed through parables and illustrations . He taught: “But seek first the Kingdom of God and His righteousness, and all these thing shall be added to you” (Matt.6:33) and “You see, the kingdom of God is within you.” (Lk.7:21).
He proclaimed the “good news” that the coming Kingdom of Heaven was at hand, and established the Christian Church.
Some of Jesus’ most famous teachings come from the Sermon on the Mount, which contains the Lord’s Prayer (“Our Father”) and the Beatitudes (from Latin beatus, meaning “blessed” or “happy”). The message of Jesus was one of humility, charity, and brotherly love. He taught transformation primarily of the inner person. Jesus presents the Beatitudes, not as proscriptions, but in a positive sense, virtues in life which will ultimately lead to reward.
The Beatitudes:
1. Blessed are the poor in spirit, for theirs is the kingdom of heaven.
2. Blessed are they who mourn, for they shall be comforted.
3. Blessed are the meek, for they shall inherit the earth.
4. Blessed are they who hunger and thirst for righteousness, for they shall be satisfied.
5. Blessed are the merciful, for they shall obtain mercy.
6. Blessed are the pure of heart, for they shall see God.
7. Blessed are the peacemakers, for they shall be called children of God.
8. Blessed are they who are persecuted for the sake of righteousness, for theirs is the kingdom of heaven.
9. Blessed are you, when men shall revile you, and persecute you, and shall say all manner of evil against you falsely, for my sake.
10. “Rejoice and be glad, for your reward in heaven is great; for in the same way they persecuted the prophets who were before you. (Matt.5:3-12 and Lk. 6 :20-23).
Jesus’ two greater commandments are: “You shall love the Lord your God with all your heart” and “You shall love your neighbors as yourself.” (Mark 12:30-31).
The heart of the Christian faith with remarkable clarity is expressed in First Letter of John: “God is love, and he who abides in love abides in God, and God abides in him” (1 John. 4:16). Christian ethics is based on the Golden Rule: “And just as you want men to do to you, you also do to them likewise”. (Lk. 6:31). “Judge not, and you will not be judged; condemn not, and you will not be condemned; forgive, and you will be forgiven; (Lk. 6:37).
A key characteristic of Jesus’s teachings are an emphasis on forgiveness and unconditional love.
The significant statements of Jesus’s teachings are:
1. The Absolute values and creative essence of the every human individual created by God in His own image and likeness.
2. The Equality of all people in their relationship with God.
3. The Perfect Destiny of Man, which is the infinite, spiritual Self-improvement. “Be perfect” (Matt. 5:48).
Several other religions revere him in some way.
Hindus acknowledge him as an avatar of Got. In Islamic tradition Jesus (Isa) is highly regarded as born of the Virgin Mary and as a bringer of scripture, a worker of miracles and a prophet and also the Messiah.
Major works:  Christ’s ministry and life are recounted in the four Gospels of the New Testament of Luke (60 AD), Matthew (60-65 AD), Mark (60-65 AD) and John (85-90 AD).

Lionel Messi – One of the best Football Players in the...

Pierre de Fermat – One of the greatest mathematicians of all...