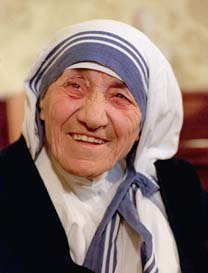 Agnes Gonxhe Bojaxhiu
(26/27 August, 1910, Üsküb, Ottoman Empire (now Skopje, Republic of Macedonia) -5 September 1997, Calcutta, India) (aged 87)
Nationality: India
Category: Votaries оf Spirit
Occupation: Devotees
Unique distinction: The founder of the Order of the Missionaries of Charity, beatified by Pope John Paul II, canonized by Pope Francis on 4 September 2016 and given the title Blessed Teresa of Calcutta.
Ethnicity: Albanian.
Winner of the Nobel Peace Prize (1979).
Gender: Female
Mother Teresa Quotes: 1. Peace begins with a smile. 2. We cannot do great things on this Earth, only small things with great love. 3. Joy is a net of love by which you can catch souls. A joyful heart is the inevitable result of a heart burning with love. 4. A life not lived for others is not a life. Life is an opportunity, benefit from it. 5. If we pray, we will believe; If we believe, we will love; If we love, we will serve. 6. If you judge people, you have no time to love them. 7. Every time you smile at someone, it is an action of love, a gift to that person, a beautiful thing. 8. If you can’t feed a hundred people, then just feed one.

Social and professional position: Albanian and Indian Roman Catholic nun, humanitarian.
The main contribution to (what is known): She is known as the founder of the Order of the Missionaries of Charity. Her life and ministry has a great impact on” the next generations of missionaries in the whole world.
Contributions: Mother Teresa was an Albanian Roman Catholic nun who founded the Missionaries of Charity in Calcutta, India and  was internationally famed as a humanitarian and for her disinterested assistance to the poor and helpless.
For over 45 years she humbly ministered to the poor, sick, lepers, homeless and orphaned, while guiding the Missionaries of Charity’s expansion, first throughout India and then in other countries.
Mother Teresa grew famous for ministering to and the poorest of the poor in the slums of Calcutta.
She became a worldwide symbol of charity, meeting with Princess Diana, Fidel Castro and Ronald Reagan, Deng Xiaoping, John Paul II and many other public figures.
She was beatified by Pope John Paul II on 19 October 2003 and after beatification she became known as the Blessed Mother Teresa of Kolkata.
On 26 August 2010, hundreds of nuns, bishops and volunteers dwellers in the Indian city of Calcutta have marked the 100th anniversary of the birth of Mother Teresa.
She was canonized  by Pope Francis on 4 September 2016 in Saint Peter’s Square in Vatican City.
Honors and Awards: In 1963 the Indian government awarded her the Padmashri (“Lord of the Lotus”) and in 1971 Pope Paul VI awarded her the first Pope John XXIII Peace Prize. In 1973 she was awarded Templeton Prize(#1). In 1979 she received the Nobel Prize for Peace. In 1980 she won India’s highest civilian honour, the Bharat Ratna. In 1985 she was awarded the Medal of Freedom from the United States and in 1996 she was proclaimed an Honorary Citizen of the United States.
Major works: She founded the Missionaries of Charity, which now operates schools, hospitals, orphanages worldwide.

William James – One of the founders of Functional psychology