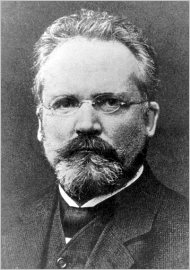 Share
Oswald Kulpe
(August 3, 1862, Kandau, Courland, Germany, now Kandava, Latvia) – December 30, 1915, Munich, Germany) (aged 53 )
Nationality: Germany
Category: Scientists
Occupation:  Psychologists
Specification: Wurzburg school, Empirical Psychology
Unique distinction: Founder and main theoretician of the Würzburg school, author of the concept “imageless thought”
Gender: Male
Quotes: 1. It would thus make no difference whether a quantum of mental energy inserts itself into the course of the material process or not: the law of the conservation of energy as formulated hitherto would not be impaired. 2. What finally led us to a different theory in psychology was the systematic application of self-observation. 3. In addition, the use of the common conceptions of sensations, feelings and presentations prevented the subjects from noticing and naming what was neither sensation, feeling nor presentation…. The subjects began to speak in the language of life and assign less importance to the presentations for their inner world. They knew and thought, they judged and understood, they grasped the meaning and saw connections without receiving any real help from occasionally occurring imagery.

Social and professional position: German psychologist and philosopher
The main contribution to (what is known): Külpe was founder of the Würzburg school of psychology. His main contributions are: the systematic experimental introspection, imageless thoughts, mental sets, conscious attitudes (Bewusstseinslagen) and abstraction. He was one of the founder of German experimental psychology.
Contributions:
1. Despite the fact that his teacher Wilhelm Wundt believed that thinking was beyond the reach of experimental psychology, Külpe first turned to the experimental study of higher psychic processes: thought and volition by the using the systematic introspection.
2. Method. He used the systematic experimental introspection or controlled self-observation(invented by Karl Marbe).
Method was not in the simultaneous unfolding of processes of thinking and its observation but in retrospective observation of the own cognitive processes during the task.
3. In this case the main object of study by this method was a procedural aspects of thinking, rather than its result.
4. The most important result of his research was the discovery of an independent mental reality, which cannot be reduced to the sensory content.
5. He introduced the concept of the “imageless thought” seemed to be that thoughts can occur without a particular sensory or imaginable content.
6. Kulpe and his colleagues found that the essence and specific of thinking is the presence of special “meanings” that impart unity, stability, activity, imagelessness and direction.
7. Philosophy. He was a Representative of critical realism. The main theme of Külpe’s work was the psychological foundations of epistemology and the theory of knowledge.
8. Founded the Institute of Psychology in the “Alte Universität” in Wurzburg together with Karl Marbe (1896).
Major works:  Grundriss der Psychologie (Outlines of Psychology), 1893; Einleitung in die Psychologie (1895; sixth edition, 1913; English translation, 1897); Philosophie der Gegenwart in Deutschland (1902; fifth edition, 1911); Immanuel Kant (1907; third edition, 1912); Psychologie und Medizin (1912); Die Realisierung (Realization) 3 volumes, 1912-23, a three-volume text composed of Külpe’s lectures. Books by Külpe include the 1912 publication of Psychologie und Medizin and Philosophie der Gegenwart.

Origin: Oswald Külpe was born in Kandau, Courland, His parents were German. He had a brother, Alfons Külpe who was a clergyman, and a sister who was a nurse.
Education: He graduated from Gymnasium at Libau he in 1879. In 1881 he enrolled in the University of Leipzig were he attended the lectures of Wilhem Wundt. In between 1882 and 1883, Külpe studied at the University of Berlin.
Influenced by: Wilhelm Wundt
Career highlights:  Külpe studied as a doctoral student and assistant to Wundt at the University of Leipzig. In 1887, Külpe was awarded his PhD. (Thesis “The Theory of Sensual Feeling”.) As a student of Wilhelm Wundt, worked 8 years at the Leipzig laboratory (1887-1894). In 1896 Külpe had founded a laboratory at the University of Würzburg and remained there for fifteen years. He was Professor at Würzburg (1894–1909) and  Bonn (1909–13). In 1913 Külpe took a post at the University of Munich (1913-1915).
His best known pupils were N. Ach and K. Bühler, O.Zelz, J. Angell. In addition Max Wertheimer, Kurt Koffka, Charles Spearman worked with him for a time.
Wilhelm Wundt and Edward Titchener were profoundly opposed to the idea of imageless thought, in spite of this Külpe and Wundt remained on friendly terms personally.
Personal life:   He lived a large portion of his life with his older, unmarried cousins, Ottillie and Marie Külpe, at their residences in Leipzig, Würzburg, Bonn, and Munich. He never married either and throughout the years he devoted an immense amount of his time to his work.
Zest:   Külpe would joke that science was his bride. Wundt and Titchener were profoundly opposed to the idea of imageless thought.

Peyton Manning – One of the Best Football Players (NFL)