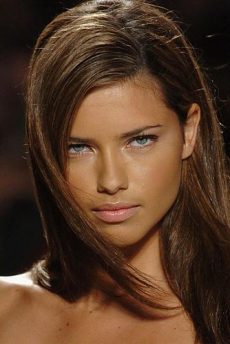 Adriana Francesca Lima
(June 12, 1981,  Salvador da Bahia, Brazil)
Nationality: Brazil
Category: Celebrities
Occupation: Models, Actors
Unique distinction: One of the most famous and in-demand models of the world, one of Victoria’s Secret’s Perfect 10 (from 1999 to 2018). She was the longest-running model and was named “the most valuable Victoria’s Secret Angel” in 2017.
Agency: Creative Artists Agency (New York, Los Angeles), Elite Model Management (Paris, London, Milan)
Height: 178 cm (5 ft10in).
Weight: 59 kg (130 lb).
Measurements:  89-61-89 (EU);  35-24-35(US).
Eye Color: Blue.
Gender: Female
Quotes:
1. Be sure what you want and be sure about yourself. Fashion is not just beauty, it’s about a good attitude. You have to believe in yourself and be strong.
2. Just be happy and you will be beautiful.
3. Fashion is about good energy. It’s about feelings. That’s what I have to give the people, good energy and good feelings.
4. I don’t like fights. I don’t like aggressive people.
5. Don’t try to be what you’re not. If you’re nervous, be nervous. If you’re shy, be shy. It’s cute.
6. I love challenges, I love the intensity, and I also like to challenge my mind.
7. If you ask people what they’ve always wanted to do, most people haven’t done it.
Video: Victoria’s Secret
Website: Adriana Lima
Facebook  Twitter  Instagram

Adriana Lima has been modelling since 1994, first in Brazil and later from 1997 in New York City and Europe. Thus, in 1996 Lima won Ford’s “Supermodel of Brazil” competition and took second place the following year in the Ford “Supermodel of the World” competition before signing with Elite Model Management in New York City.
But the greatest worldwide fame and status of supermodel Lima was gained by participating in the Victoria’s Secret Fashion Shows. There she gained recognition as one of Victoria’s Secret’s Perfect 10.
She’s worked with some of the world’s great image-makers: Steven Meisel, Patrick Demarchelier, Peter Lindbergh and Ellen von Unwerth, Vera Wang, Christian Lacroix, Emanuel Ungaro, Giorgio Armani, Fendi, Ralph Lauren, Valentino and appeared in the world’s top magazines: Vogue Italia, Marie Claire, Elle, Harper’s Bazaar, and others.
She has been profiled on E! Entertainment Television The Travel Channel, Viva, Extra.
In 2010 she was represented in New York City and Paris by Marilyn Agency.
Lima is currently ranked by models.com as one of the “New Supers”.
In January 2017, Lima was named “the most valuable Victoria’s Secret Angel” according to analytics company D’Marie.

Origin: Adriana Lima was born on June 12, 1981, in Salvador, Bahia, Brazil. Her father was Nelson Torres, a carpenter. She was the only child in her family and was raised by her mother, Maria da Graça Lima who was a social worker.
Her unique beauty is derived from her Native-Brazilian, African-Brazilian, Portuguese, Japanese, French, Swiss, West Indian and Caribbean heritage.
She was raised in the Castelo Branco neighbourhood of Salvador.
Education: She studied at secondary school, where she had won many beauty pageants.

At the tender age of 13, Adriana entered the Ford Supermodel of the World Contest. At the age of 15, she entered and finished in first place in Ford’s “Supermodel of Brazil” model search and in 1996 second place in a “Ford Supermodel of the World” contest.
In 1997, Lima moved to New York City and then gained the status of one of the world’s top fashion models.
Moving to New York at age 16, Adriana joined the Elite Model Management and further pursued her modelling career, landing a campaign for the fashion designer Anna Molinari’s clothing line. Her appearance in several Guess campaigns gained her the world’s fame and recognition.
Since then, she has appeared in campaigns for Anna Sui Jeans, Bebe, Gasoline, Mossimo,  BCBG, Keds, and XOXO, and has appeared on the covers of magazines such as Vogue and Marie Claire.
In  1999 Lima began to participate in the Victoria’s Secret Fashion Shows.
Adriana Lima has appeared on subsequent shows ever since, opening the show in 2003, 2007, 2008,  2010, 2012, 2014, 2016, 2018.
Later Lima has worked for notable fashion brands Armani, Versace, Prada, Guess?, Bulgari, Miu Miu, Donna Karen, Emporio Armani, Givenchy, Keds, Mossimo, Marc Jacobs, and Louis Vuitton.
She has worked with the most established photographers in fashion and appeared on the covers of the most popular fashion magazines.
Lima returned to the high fashion runway in 2009, walking for Givenchy.
In 2015, she became the face of Vogue Eyewear and of Marc Jacobs’ fragrance Decadence.
Lima is the current brand ambassador for the Barcelona-based clothing brand Desigual.
She is also known as a spokesmodel for Maybelline cosmetics since 2003 and for her Super Bowl and Kia Motors commercials.
In April 2016, Lima became the face of Italian lingerie brand Calzedonia’s Swimwear collection.
In 2018, Lima became a brand ambassador for Puma, and for the Brazilian-based footwear and accessories label Schutz.
In November 2018, Lima walked in her final Victoria’s Secret Fashion Show.
In 2019, Lima was the face of Miu Miu cruise campaign, of Chopard Spring/Summer campaign

Adriana Lima was shy around boys when she was younger, not receiving her first kiss until she was 17 years old.
From 2001 to 2003 she has been romantically linked to musician/singer Lenny Kravitz and later Prince Wenzeslaus of Liechtenstein.
As of Valentine’s Day, 2009 she is married to  Serbian basketball player Marko Jaric (6′ 7″,  b. 12 October 1978), whom she began dating in November 2007. They wed in a private civil ceremony in Jackson Hole, Wyoming.
On November 15,  2009, Lima gave birth to her first child, daughter Valentina Lima Jarić and on September 12, 2012, second daughter Sienna. On May 2, 2014, Lima and Jaric announced their separation after five years of marriage. They finally divorced in March 2016.
In early 2015 she started dating her boyfriend Joe Thomas,  a boxing coach and trainer at Miami Beach.
In June 2016 Adriana Lima has split with Joe Thomas and became single, free and happy again.
In June 2017 she met 35-year-old Turkish writer Metin Hara. “We realized that we have feelings for each other. Both of us are still getting to know one another.” – said Metin.
She is a devout Catholic who attends church every Sunday. Staying true to her religious roots, she is known for taking a Bible backstage to read.
Lima resides in Miami and previously owned an apartment in New York City.
Zest:  Nicknames: The Goddess, “The World’s Most Voluptuous Virgin. “Steel blue-eyed beauty with the mole on her chin.
In addition to her native Portuguese, Lima speaks English, French, and a bit of Italian.
Adriana Lima was ranked #1 on Askmen.com’s Most Desirable Women (2004).
Her favourite author is Gabriel Garcia Marquez.
Andriana says: “Fashion is about good energy. It’s about feelings. That’s what I have to give the people, good energy and good feelings.”