1. Сreativity as the unfolding of the Absolute,  a universal process of evolution and Creativity of Nature

1.1. Creativity as an embodiment of the Absolute and the co-creation of man with the creative power of the Supreme Reality

Man as an mediator between heaven and earth, as an active, creative force – “qian” (“Book of Changes” (“I Ching”), 16th. -12th. c. BC); Creativity as a secondary act of creation, the unity of Brahman and Atman (Hinduism, 15th. c. BC); The principle of the analogy of human creativity and divine creativity, occurring under the laws of harmony (Neo Pythagoreanism, 1st c. BC-3rd. c. AD); Emanation of the One, out of abundance and surplus (Plotinus, 3rd c. AD, Proclus, 5th c. AD); Co-creation as a one breath with the Absolute reality (Ibn Arabi, 12th-13th c.); Confluence and co-vision with the Divine (M. Eckhart, 13th-14th c.); Unity of Creator and creation, the creative power of man (Nicholas of Cusa, 15th. c.); Co-creation with the Absolute and Nature through transcendental intuitive contemplation (F. Schelling, 1802); Self-revelation of the Absolute Spirit (Hegel, 1807); Embodiment of beauty, harmony, perfection and spiritual which are contained in Nature (R. W. Emerson, 1836; H. D. Thoreau, 1854); The concept of “transcreation” or complementary act of God, raising the soul from animality to humanity; Implementation of the divine creative force of will, living in a man, free creativity of substantial figures (N.O. Lossky, 1906, 1927); Creativity as super-personal experience, “escape from emotion and personality”, expression and development of tradition living within the creator (T.S. Eliot, 1920, 1932); Creativity as a free self-realization of person, as a spiritual being, transforming and embodying the absolute values (R. T. Flewelling, 1926); Implementation of universal archetypes (C. Jung, 1928); Co-creation with God (N. Berdyaev, 1935); Human Creativity as a creative expression of absolute, universal force (Nishida Kitaro, 1927, 1945); Creativity as the forming principle and way of a human being, person as the primary creative reality (E. Mounier, 1936); Evolution as the concentration and planetarization of consciousness (Teilhard de Chardin, 1955).

1.2. Сo-creation with the ultimate Creative force by achieving the higher states of consciousness

1.3. Creativity as mutual transitions of Being and Nothing

The appearance and disappearance as a mutual transitions of chaos and cosmos, the limit  and infinity (Anaximander, 7th -6th c. BC, Pythagoras, 6th -5th c. BC);  Emergence of Being inside Nothing, in the process of permanent mutual transition of universal polar forces the yin and the yang (Laozi, 6th -5th c. BC); Flow of  becoming which involves being and nothing as its separate aspects (Heraclitus, 6th -5th c. BC); Creativity as a transition from  Nothing into Being (Plato, 5th – 4th BC); Creation as a transition from invisible state to visible one (Sextus Empiricus, 2nd – 3rd c. AD);  Creativity as self-unfolding and folding of the Absolute, as the coincidence of opposites (coincidentia oppositorum) (Nicholas of Cusa, 1460); Development and becoming as the transition from being to nothing (and conversely) (Hegel, 1806).
Synergetic model of creativity. Autopoiesis: self-generation, self-organization, self-production (H. Maturana, F. Varela, 1973); Universal process of birth order and form out of chaos (R. May, 1975);  Creativity as a spontaneous generation  of order out of chaos (Ilya Prigogine, 1980, 1984, H. Haken, 1981); Creativity and development as a spontaneous and directed transformation (D. Feldman, 1988);  Creativity as a Spontaneous self-organization of Metaconscience (V.V. Nalimov, 1989); Creativity as self-organization as the path from chaos to the integrity and coherence (F. Barron, 1990),  Creativity as overcoming the chaos, the union of order and disorder and the creation of a new qualitative  patterns (V. Kenny, H. Gardner, 1988, E. Morin, 1994; S. Kauffman, 1995);  Chaos as a creative origin, as a complicated order, as a condition and  source of self-organization and creativity (E.N. Knyazeva, S.P . Kurdyumov, 1988, 1992; D. Chernavskiy, 1990; I.S. Dobronravova, 1991; V.I. Arshinov 1977; R.A. Brage, 2004; A.A. Koblyakov, 2010; O.I. Glazunova, 2012); The unity of understanding of creativity both in the Synergetic and Eastern philosophy (F. Capra, 1989; E.N. Knyazeva, 1992; T.P. Grigorieva, 2002).

1.5. Creative Vision of the World

A Spiritual Vision (Darshan) as an intuitive enlightenment and rational understanding of reality (Hinduism, 15th.c. BC); Contemplation (refined thought) as the fullness of the mind and visualization (Cun Xiang) (Daozizm, 6th c. BC); Penetrating vision (vipassana) and enlightenment (Buddhism, 6th. c. BC); Contemplation of ideas, entities, and beauty (Plato, 5th-4th c. BC); The highest value of the metaphysical, “disinterested contemplation” as the beginning of the knowledge (Aristotle, 4 th. c. BC);The spiritual vision (Plotinus, 3th. AD); Intuitive, inner, superconscious contemplation of essences (Augustine, 4th -5th c.); Transcendental mystical vision of the truth (al-Ghazali, 11th.-12th. c., Ibn ‘Arabi, 12th -13th c. ); Achievement of satori and the acquisition of a new vision (Zen Buddhism, 12th c.); Aesthetic , productive contemplation (F.Shelling, 1800), Creativity as the contemplation of pure essences (A. Schopenhauer, 1819); Eidetic intuition and constitution of meaning (E. Husserl, 1913); Transcendental, intuitive vision of the entities and the identification of consciousness with the world (N.O.Lossky, 1908; N.A. Berdyaev, 1916; S.L. Frank, 1917); Person’s Vision as a source of creativity and creation of the worlds of culture (G. Simmel, 1911,1918); Transition from action to the vision, the unity of the transcendental and phenomenological vision from the standpoint of absolute emptiness “Basho” (Nishida Kitaro, 1927); The aesthetic attitude and perception of the world (A.A.Melik-Pashayev, 1990); Creative vision as the unity of creative stand (meta-attitude), higher state of consciousness and method. (S.L. Markov, 1997, 2011). 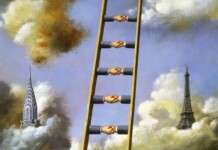 Creativity as the creation and realization of the Whole

Creativity as the creation and implementation of Possibilities

Creativity as achievement and realization of a Freedom

The Main Stages of Creativity