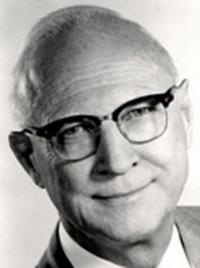 Social and professional position: American psychologist, 59th President of the American Psychological Association
The main contribution to (what is known): Author of a three-dimensional model of intelligence and the concept of Divergent Thinking. Applied psychology: psychometrics.  One of the founders of the Psychology of Creativity.

Contributions in Psychology of Intellect and Creativity

1. Structure of Intellect (SOI) or (SI): three-dimensional model.
Guilford proposed that intelligence is not a unitary concept and introduced a three-dimensional theoretical model of the Structure of the intellect, according to which the intellect may be represented by three aspects—the operation (cognition, memory, divergent production, convergent production, evaluation), products (units, classes, relations, systems, transformations, and implications), and content (visual, auditory, symbolic, semantic, behavioural). The final version of the SOI model (1988) resembled a cube with3 dimensions, or  6 x 5 x 6 figure, that yields a total of 180 possible unique abilities, which are correlated with each other.
2. Creativity. Joy Guilford in his 1950 American Psychological Association (APA) presidential address emphasized the central significance of creative talent for industry, science, arts and education and the need for more research into the nature of creativity. He developed a theory of creativity, in which he described creativity as sensitivity to problems  (1950); as divergent thinking and ability to generate multiple ideas (1959),  creation of new patterns, a transformation of knowledge and meaning or use the functions of objects in a new way (1962, 1967).
3. Divergent thinking.  Guilford first proposed the concept of  Divergent Thinking in the 1950s and later introduced its developed model as the main ingredient of creativity (1976).  Thus he associated divergent thinking with creativity, appointing it several characteristics:
1. fluency (the ability to produce a great number of ideas or problem solutions);
2. flexibility (the ability to simultaneously propose a variety of approaches to a specific problem);
3. originality (the ability to produce new, original ideas);
4. elaboration (the ability to systematize and organize the details of an idea in a head and carry it out).
He also emphasized the distinction between convergent and divergent thinking.
4. Psychometric study of human intelligence. Joy Guilford is one of the leaders of the psychometric school of research on intelligence, creativity and personality.
He initiated the development of a system of psychological tests for the study of productive thought and the creative abilities of the individual. He designed numerous tests that measured divergent or creative thinking and the intellectual ability of creative people.
Guilford’s methods have been widely used with the practical aim of identifying the creative potentialities of engineers and scientific workers and gifted students.
Honours and Awards: In 1938 Guilford became the 3rd President of the Psychometric Society; President of the Western Psychological Association (1946); Presi¬dent of the American Psychological Association (1949); Doctor of Laws (University of Nebraska. 1952); PhD, Sociology (University of Southern California, 1962), Gold Medal of the American Psychological Foundation (1983).
Major works: Guilford published over twenty-five books, thirty tests, and 300 journal articles.
1. Guilford, J.P. (1939). General Psychology. Van Nostrand.
2. Guilford, J.P. (1950). Creativity. American Psychologist 5: 444-454.
3. Guilford, J.P. (1954). Psychometric Methods. McGraw-Hill Education.
4. Guilford, J.P. (1956). A Factor-analytic Study of Verbal Fluency: Studies of Aptitudes of High-level Personnel. University of Southern California.
5. Guilford, J.P. (1956). Fourteen Dimensions of Temperament. American Psychological Association.
6. Guilford, J.P. (1959). Traits of creativity in Creativity and its Cultivation. pp. 142-161. Harper and Row.
7. Guilford, J.P. (1967). The Nature of Human Intelligence. McGraw-Hill Education.
8. Guilford, J.P. (1968). Intelligence, Creativity and their Educational Implications. Robert R. Knapp.
9. Guilford, J.P. (1971). Analysis of Intelligence. McGraw-Hill Education.
10. Guilford, J.P. (1977). Way beyond the IQ. Creative Education Foundation.
11. Guilford, J.P. (1980). Intelligence Education is Intelligent Education. International Society for Intelligence Education.
12. Guilford, J.P. (1980). Some changes in the structure of the intellect model. Educational and Psychological Measurement 48: 1-4.
13. Guilford, J.P. (1982). Cognitive psychology’s ambiguities: Some suggested remedies. Psychological Review 89: 48-59.
14. Guilford, J.P., and B. Fruchter. (1973). Fundamental Statistics in Psychology and Education. McGraw-Hill Education.
15. Guilford, J.P. (1988) Some Changes in the Structure-of-Intellect Model” (Educational and Psychological Measurement, vol. 48, pp. 1-4).

Origin: Joy Guilford was born on March 7, 1897, in Marquette, Nebraska.
Education: Guilford graduated from the University of Nebraska. (1918-1924). In 1924 he entered the psychology PhD program at Cornell University (1919 to 1921), where he studied with E. B. Titchener, Kurt Koffka. He was awarded the PhD in 1927.
Career highlights: Guilford taught at the University of Kansas (1927 – 1928), was an Associate Professor at the University of Nebraska (1928 – 1940), a Psychology professor at the University of Southern California (1940 – 1967). In 1938 Guilford became the 3rd President of the Psychometric Society.
In 1941 he entered the U.S. Army and served as Director of Psychological Research Unit No. 3 at Santa Ana Army Air Base.
After the war, he joined the Education faculty at the University of Southern California where he continued to work on the intelligence tests that measured divergent thinking and creativity.
Personal life:
Family: His wife – Ruth and his daughter – Joan S. McGuire (Author of the book about her father “An Odyssey of the SOI Mode”.
Guilford retired from teaching in 1967 but continued to write and publish.
He died on November 26, 1987, in Los Angeles, California. 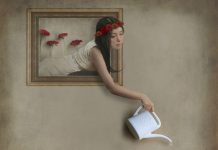 Sense creation in the structure of processes of meaning dynamics

Kvintological approach to the construction of a unified theory of creativity