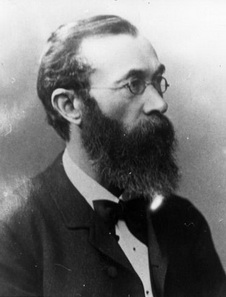 Wilhelm Maximilian (Max) Wundt
(August 16, 1832, Nekarau, near Mannheim, Baden -31 August 1920, Großbothen near Leipzig, Germany)
Nationality: Germany
Category: Scientists
Occupation:  Physiologists, Psychologists
Specification: Experimental psychology
Unique distinction: Founder of experimental psychology, one of the founders of cultural psychology (Psychology of peoples) and ethnopsychology, one of the fathers of modern psychology
Gender: Male
Quotes:
1. Physiological psychology is, therefore, first of all, psychology.
2. We speak of virtue, honour, reason; but our thought does not translate any one of these concepts into a substance.
3. The distinguishing characteristics of mind are of a subjective sort; we know them only from the contents of our own consciousness.
4. Our mind is so fortunately equipped, that it brings us the most important bases for our thoughts without our having the least knowledge of this work of elaboration. Only the results of it become unconscious.
5. The materialistic point of view in psychology can claim, at best, only the value of a heuristic hypothesis.

1. Psychology as an independent field of study.  He is one of the first and most famous originators of the program of development of psychology as an independent science.
Wundt argued that psychology has its own laws: a). the law of creative synthesis, b). the mental relationships law, c). the law of contrast, d). heterogony of ends (purposes) (Heterogonie der Zwecke).
In addition to the associative relationship between the elements, he introduced apperceptive connections, which is identified with the attention and will, connecting the separated elements into a coherent whole.
In 1862 at the University of Heidelberg he also offered the first course ever taught in scientific psychology.
2. Physiological psychology. He proposed a plan for the development of physiological psychology as a special science, using the method of laboratory experiments.
His Principles of Physiological Psychology (1874),  was the first textbook that was ever written in the field of psychology
3. Experimental psychology. He is regarded as the founder of experimental psychology. Introduced into psychology is the experimental method of investigating conscious processes as well as the use of introspection.
4. First psychologist laboratory.  Founder of the first research psychologist laboratory (1879) at the University of Leipzig.
5.  First journal of psychology. Founder of the first journal of psychology “Philosophical studies” (1881), from 1903 “Psychological studies”.
6. Cultural psychology. A pioneer in the development of cultural-historical psychology and the Psychology of people (in German – Völkerpsychologie), which he understood as the doctrine of the social basis of the higher mental activities.
7. The method of investigating higher mental processes (along with the experiment and introspection) is to analyze the manifestations of the human spirit and creative activity: language, fairy tales, myths, custom, art and religion.
Wundt’s notable ideas: “the theory of actuality”, the “principle of psychophysical parallelism”, “voluntarism”, “creative resultants”.
During the years at Leipzig, Wundt supervised 186 doctoral dissertations in various disciplines and taught over 24,000 students. Among his prominent students were: Oswald Külpe, Edward Titchener, James McKeen Cattell, Charles Spearman, G. Stanley Hall, Charles Hubbard Judd, Lightner Witmer and Hugo Munsterberg, Russian psychologists Vladimir Bekhterev and Ivan Pavlov.
Wundt’s system was developed by his student, Edward Titchener, who named his system structuralism.
Major works:  Contributions to the Theory of Sense Perception (1858–62), Lectures on the Mind of Humans and Animals (1863), Principles of Physiological Psychology (1873-1874), (two-volume work, one of the most important in the history of psychology), Outline of Psychology (1896), Introduction to Psychology (1911), Folk Psychology (Völkerpsychologie ) (10 vol. 1900–20).
Philosophical texts: Logic (1880-1883), Ethics (1886), System of Philosophy (1889). His lectures on psychology were published as Lectures on the Mind of Humans and Animals (1863–1864).

Origin:  Wilhelm Wundt was born in the German town of Neckarau, Baden, the fourth child to parents Maximilian Wundt, a Lutheran minister, and his wife Marie Frederike, née Arnold (1797-1868). When Wundt was about six years of age, his family moved to a small medieval town in Baden-Württemberg.
Education:  At the age of thirteen, Wundt began his formal education at a Catholic Gymnasium at Bruchsal (1845-1851).
From 1851 he studied at the University of Tübingen, but after one year he transferred to the University of Heidelberg, where he majored in medicine (M.D., 1856). From 1856 he studied with J. Müller at the University of Berlin.
Influenced by: Gustav Fechner, Johannes Peter Müller, Hermann von Helmholtz.

Wilhelm Wundt graduated as a doctor of medicine from the University of Heidelberg  (1856).  There he was appointed lecturer in physiology and in 1858 he became an assistant to the physicist and physiologist Hermann von Helmholtz (1858 – 1865). In Heidelberg, he wrote Contributions to the Theory of Sense Perception (1858–1862).
In 1867 he became a professor in acquainting medical students with the exact physical needs for medical investigation. In 1871 Helmholtz moved to Berlin , and Wundt was passed over as Helmholtz’s replacement.
In 1874, he became a professor of “Inductive Philosophy” at the University of Zurich.
In 1875, Wundt moved to Leipzig where he worked as a professor at the University of Leipzig  (1875–1917). He stayed and worked there for the next 42 years and it was the most productive phase of his career.
There, in 1879, Wundt opened the first laboratory ever to be exclusively devoted to psychological studies. In Leipzig he also established the Institut fur Experimentelle Psychologie (1879). During 1889–90 he worked as a Rector of Leipzig University.
His interest in psychology was inspired by Ernst Weber (1795–1878) and Gustav Fechner (1801–1887), who worked at Leipzig.
In 1917 he retires from teaching.

Titian – One of the greatest High Renaissance Painters