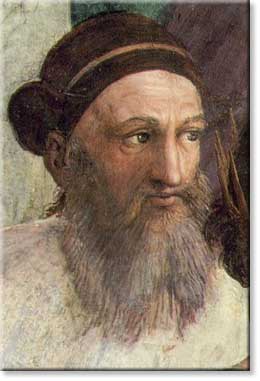 Social and professional position:  Zoroaster was a Persian, ancient Iranian prophet, spiritual teacher, philosopher and religious poet.
The main contribution to (what is known): Zoroaster was known as a great religious reformer and founder of Zoroastrianism.
Contributions: Zoroaster was an ancient Iranian prophet, philosopher and religious poet. He was a religious reformer of ancient Persia (now Iran) and the founder of the pre-Islamic religion of Zoroastrianism.  The hymns attributed to him, the Gathas, are at the liturgical core of this religion.
Some of the fundamentals of the teachings of Zoroaster are:
1. The universe is the cosmic struggle between two primaeval powers aša (asha) “truth”, “good” and druj “lie”, “evil”.
2. Good and evil are separate entities at war with each other, in the form of Ahura Mazda (Ormuzd -Persian) (the god of good, creation and truth) and Angra Mainyu (Ahriman –Persian) (the god of evil destruction and lies). The two great opposing principles are also called the king of light and the prince of darkness.
3. The cardinal concept of aša (asha)  – is at the foundation of all other Zoroastrian doctrines, including that of Ahura Mazda – omnipotent God (who is aša), creation (that is aša), existence (that is aša) and Free Will.
4. The purpose of humankind is to sustain aša through active participation in the life and the exercise of good thoughts, words and deeds (the ethical triad), such as the raising of children and the planting of trees.
5. Everyone must make choices between siding with Ahura Mazda and following the path of truth, or uniting with Angra Mainyu (Ahriman) and following the way of falsehood. Moreover, the best way to overcome Ahriman is a joy, despondency is a sign of his victory.
Man’s noble position, free and right choice and his good thoughts, words and deeds lead to the triumph of Ahura Mazda, to the victory of truth and to the achievement of human happiness. In assigning this choice to man, Zoroaster raises him to the process of active co-participation and co-creation.

The supreme god and his Seven Angels represent the personification of abstract ideas, devoid of flesh:
Ahura Mazda (Wise Lord), Hshatra Variya (Desirable Dominion), Hourvatat (Integrity, Perfection or Health’), Amertat (Immortality), Vohu mana (Good Mind), Asha Vahishta (Best Righteousness ), Spenta Armata (Holy Humility), Sraosha (Obedience, awareness, keeping balance).
Furthermore, it remained the most popular deities of ancient Iranian pagan religion: a beautiful Ardvi Sura, Anahita and Mithra, the god of sunlight.
Zoroaster founded dualistic religion which is not affected by a notion of original sin or by ascetic tendencies. The Fravahar (Guardian angel) is the best-known symbol of this religion. It is a figure with a human face and two wings, which feathers indicate three symbols of good reflection, words and deed. One of his hands points upwards, showing that we have to struggle to thrive.
The holy book of Zoroastrianism is the Avesta (“Praise”), which includes The Gathas (the 17 hymns of Zoroaster) liturgical texts and prayers. Only the earliest part of the Avesta – The Gathas was composed by the prophet himself. The other parts, which include hymns, prayers, litanies, and religious law, were written over a period of perhaps several centuries.
Zoroastrianism is also sometimes called Parsiism, after the Parsi community of India where it is practised.  This religion is also called Mazdaizm on behalf of the supreme deity Ahura Mazda.
Zoroastrianism is one of the first monotheistic religions and is considered an early strong influence on Judaism, Christianity and Islam.
In Greek and Western culture, Zoroaster was known as a great sage, magician, and miracle worker. He is first mentioned by Plato, Plutarch and Heraclitus, who is often referred to as inspired by Zoroaster’s thinking. Scholars pointed out the similarities between Zoroaster’s philosophy and the ideas of Baruch Spinoza. Voltaire stated that Zoroastrianism was a form of rational Deism.
Major works: The Gathas – the earliest part of the Avesta.

Origin: Zoroaster was born probably in Ragha in Western Iran into the priestly family of the Spitamids and his ancestor Spitāma. His father’s name was Pourushapa and his mothers were Dughdova. Some scholars proposed that Zoroaster’s father was from Atropatene (also in Medea) and his mother was from Rey. According to the tradition, he had four brothers, two older and two younger.
Education: The training for priesthood probably started very early around seven years of age. He gained knowledge from other teachers and personal experience from travelling when left his parents at twenty years old.

He became a priest probably around the age of fifteen. In the beginning, Zoroaster was a priest in his tribal religion, with which he eventually became disillusioned.
Zoroaster received a religious vision from Ahura Mazda surrounded by seven shining beings when he was about 30 years old. After receiving a vision, he began teaching that Ahura Mazda was the highest god and alone was worthy of worship. For the first time, he strengthened a monotheism concept that went against the polytheism of the Iranian religion. He travelled throughout Persia and tried to awaken his people to the importance of righteousness and justice, forbade the orgiastic rites that accompanied animal sacrifice.
Moreover, Zoroaster preserved the ancient cult of fire worship. Fire, as a symbol of ‘Asha’ and the ‘original light of God,’ even now holds a special place of esteem in Zoroastrianism.
He met with the indifference of his people and the opposition of the communities’ religious leaders. He was forced to leave his homeland (one prayer- mourning addressed to Ahuramazda has preserved in the “Gathas”- “Where to run?”). Harassed by his opponents at home, he fled to eastern Iran, where he converted the Kianid king, Vishtaspa, to his religion. After converting a king to his teachings, Zoroaster remained at the royal court. The religion then spread rapidly through Vishtaspa’s domain.

It is said that Zarathustra laughed when he was born and the whole world laughed with him.
He married the daughter of Vishtaspa’s good vizier, Frashaoshtra, and gave his own daughter in marriage to Jamaspa, another good vizier of the King. His new wife was called Hvovi (Hvōvi) and before her, Zoroaster was married twice. His first two wives gave birth to him three sons Isat Vastar, Uruvat-Nara and Hvare Ciθra and three daughters Freni, Pourucista and Triti.
Zoroaster died about 551 bc. at the age of 77 years. In Shahnameh, Zoroaster is said to have been murdered at the altar by the Turanians in the storming of Balkh.
The dates given for Zoroaster by ancient and modern writers differ considerably. The traditional Parsi people place the Prophet as older than 6000 BC. Some scholars believe that he lived sometime (1750 -1500 BC), other (1400 -1200 BC) or about the 10th century BC.
The more modern authors have placed him between 1000 and 600 B.C. According to the views of some reputable scholars, Zoroaster must have lived “258 years before Alexander.” Alexander the Great conquered Iran in 331 B.C.
This places the Prophet in six century BC and makes Zoroaster a contemporary of Buddha, Laosi, Confucius, Thales, Anaximander and Pythagoras. In some incomprehensible way, Zeitgeist simultaneously created this amazing constellation of geniuses.
Zest: Zoroaster appears as “Sarastro” in Mozart’s opera Die Zauberflöte, in opera Zoroastre, by Jean-Philippe Rameau and in  Richard Strauss’s Opus 30. Zarathustra’s story was fictionalized by Friedrich Nietzsche in his book Also Sprach Zarathustra (Thus Spoke Zarathustra) (1885). Zoroaster was mentioned by the nineteenth-century poet William Butler Yeats. His wife and he were said to have claimed to have contacted Zoroaster through “automatic writing”. At present time there are about 200 000 Zoroastrians throughout the world.

Nicolaus Copernicus – Creator of the heliocentric model of Universe